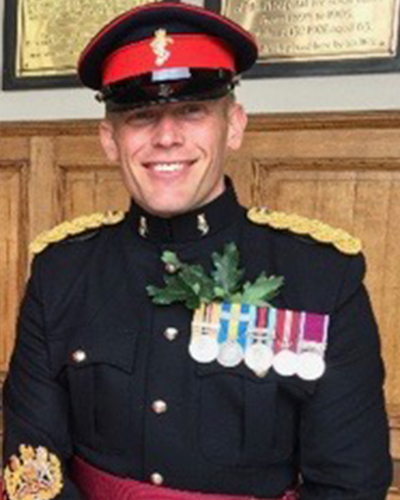 WO1 Hembery assumed the appointment of Corps Artificer Sergeant Major in May 2018.  He was invited to be a Trustee of The REME Charity during the same month and was chosen to be the lead Trustee for internal communication.

WO1 (Corps ASM) Hembery joined the Army in September 1999 and completed Basic Military Training at the Army Apprentices College, Arborfield, aged 16. After successful completion of basic and trade training as an Aircraft Technician he was promoted to LCpl.

His first assignment was at 7 Air Assault Battalion, in 2003 he was selected to deploy on Op TELIC, first deploying to Kuwait to regenerate aircraft, then moving to Iraq as part of the invasion force. During assignment to 3 Regiment Army Air Corps in 2005 he deployed to Bosnia as part of Op OCULUS and on Op HERRICK. During Op HERRICK he took responsibility as Crew Chief in Camp Bastion, supporting both Lynx and the Apache Attack Helicopter. For his dedication and effort, he received a Commander ES Afghanistan Commendation.

Following Artificer training, he deployed again on Op HERRICK with 3 Regiment AAC. In 2012 he was assigned to 7 Air Assault Battalion REME. It was during this assignment that he led the Army Field Gun crew to victory against the Royal Navy, as the Number 1 Trainer. He was also awarded the Commander Land Forces personal commendation for his efforts within 7 Air Assault Bn REME on the 2015 New Year’s honours list.

Assigned to 4 Regiment AAC as the AQMS of 664 Sqn, he was the engineering lead and the Platoon Commander for 47 technicians. His contribution helped 4 Regiment AAC Wksp REME to be awarded the best REME unit in the Joint Helicopter Command, and the best sub unit in the REME; receiving a commendation from the British Engineering Council. On Promotion, he was assigned back to 7 Aviation Support Battalion in the role of Artificer Sergeant Major.

Successfully gaining a Late Entry Commissioning in November 2017 he was then chosen for the privileged position as the senior soldier in the Corps as the Corps Artificer Sergeant Major.

WO1 (Corps ASM) Hembery is married to Emma. They have two children, Chloe (10) and Jacob (8). He enjoys maintaining his fitness to a high level and all forms of motorcycling and adventurous training; particularly skiing. During his time at Wattisham he has led the Field Gun Crew to three victories over the Royal Navy as the Number 1 Trainer, including breaking all competition records in 2017. In 2016 the crew received the JHC Commander’s Team award.