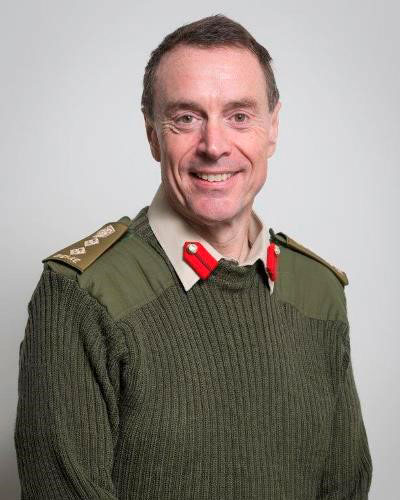 On looking for something different to do in his spare time, Col Simpson joined 1st Bn Yorkshire Volunteers as a Sustained Fire Machine Gunner in May 1986 in his home town of Doncaster.  After a short period as an NCO he was selected for Officer training, and commissioned into the 4th Bn Yorkshire Volunteers (later 3rd Bn Duke of Wellingtons Regt) in May 1988.  He undertook a variety of Pl Comd positions including Rifle and Recruit Pl.

In May 1992 as part of Options for Change, having done his time ‘in the trenches’ and favouring the comparative comfort of a fitter truck, Simpson transferred to REME, forming 146 Wksp Coy, 102 Bn REME in Rotherham, serving as Trg Offr and Coy 2i/c.  In 1995 he assumed command of 73 Engr Regt Workshop in Nottingham, then the largest Regimental Workshop in the TA and subsequently promoted to Major.  In 2002 Simpson was selected for the TA Advanced Command and Staff Course and subsequently posted back to 146 Wksp as Coy Comd. The unit prepared for deployment on OP TELIC in Iraq in late 2002, with elements of the Coy deployed in June 2003.  Simpson himself deployed in Aug 2003 as SO2 Manning and Reserves and spent 7 months in theatre.  He was responsible for the integration of reservists, designed and delivered recovery plans for returning reservists to RTMC and managed the single post manning plot.

2005, saw Simpson promoted to Lt Col as SO1 Equipment Support 2 Div (S) with responsibility for REME TA minor units across the north of England.  He assumed command of 15 (NE) Bde Regional Training Centre at York in Jan 2007, and directed the consolidation of the RTC on a single site and implemented improvements to the Recruit and Officer Trg programmes for the TA.  He moved to HQ 2 Div in Edinburgh as SO1 ES (V) in May 2010, which saw him act as Commander Equipment Support for the transition to Sp Comd in Aldershot.  He assumed the appointment as SO1 Reserves HQ Initial Training Group in October 2013 and delivered a number of key projects including Reserves Ph1 rationalisation and revision of Ph3 training provision.  He moved to the post of Colonel REME Reserves on promotion to Colonel in April 16.

Colonel Simpson was appointed as a Trustee of The REME Charity in April 2016 due to his extensive knowledge of the Reserves.  He is a member of the Benevolence Fund and Museum policy committees.

In his civilian life Simpson is a self-employed consultant in the pharmaceutical industry, which enables him to devote more time to his reservist commitments as required.  He is married to Jayne a local Parish Clerk, has 2 children Thomas (20), and William (16) and lives in North Derbyshire.  Other than the Army Reserve which his long suffering wife argues takes up most of any time available! – his (other!) main interests are motorcycling and contemporary military history, and is a recent convert to Mountain Biking / Cycling / Spinning.  He is also a keen Clay Target shooter and currently working towards qualifying as an instructor.