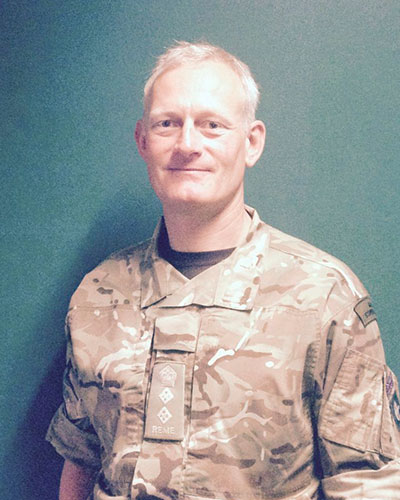 In the preceding year he served as Colonel CSS in the Army Personnel Centre (APC), responsible for the career management of all REME and RLC soldiers and officers. Prior to this he was the Chief J5 Planner in CSTCA-MAG in Afghanistan planning security force assistance and up-stream capacity building of the Afghan security ministries. From 2010 he spent 3 years as the principal SO1 working within Capability Special Projects within the MOD, responsible for the development of the Counter Terrorist Weapons capability for Defence. This included bringing into service ECM, CIED and EOD UOR equipment for Op HERRICK. Prior to this he commanded 10 Training Battalion REME in Bordon, responsible for delivering Phase 2 and 3 trade training for REME soldiers and artificers.

Earlier career appointments included deployment on Op TELIC as the Deputy J4 in MNSTC-I in Baghdad and as SO1 Career Development, responsible for the delivery of the Review of Officer Career Courses (ROCC). As a Major he attended the first Australian Joint Command and Staff Course in 2001 and was then assigned to HQ ARRC for his black bag appointment as SO2 G3 responsible for the deployment and infrastructure design of the ARRC HQ. Command of 32 Armoured Engineer Workshop from 1998-2000 included deployment on Op AGRICOLA to Kosovo. As a junior officer he commanded 25 Engineer Regiment LAD in Antrim, NI. He then moved to become the 2IC of the Commando Logistic Workshop and did his SO3 appointment as the G3 O&D/Trg with 3 Infantry Brigade in Portadown, NI.

Colonel Bullard was appointed as a Trustee of The Central Charitable Trust in 2015, on the creation of The REME Charity he was reappointed as a Trustee due to his extensive knowledge of the Charity.  His various appointments in the military have also given him a clear understanding of the needs and wants of serving REME soldiers and officers and their families.

Colonel Bullard is married to Fiona and they have two children – Alexandra (19) and Cameron (17). He remains a keen sportsman, including all Winter Sports, Rugby, Mountaineering and general fitness.