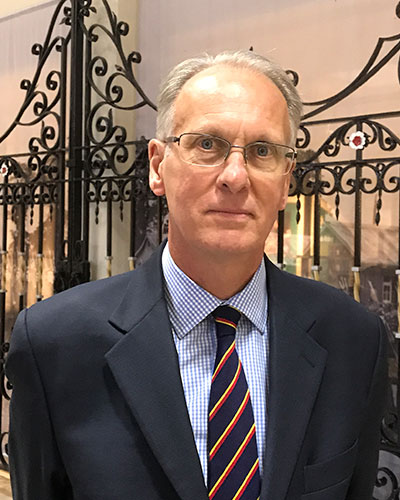 Major General Stephen Andrews has been Chairman of Trustees of The REME Charity since it was created by incorporation in Spring 2016.  Before then he had been Chairman of Trustees of the REME Central Charitable Trust, the REME Benevolent Fund and the REME Museum since January 2014.  He is a member of the Corps Council and a former Colonel Commandant REME.  He has extensive experience of the Services charitable sector, having been a trustee of the Army Central Fund, the Army Dependents’ Trust and ABF – The Soldiers’ Charity.  He is also a Champion of the Defence Medical Welfare Service.

Major General Andrews served as a regular REME officer from 1976 to 2012, having attended Welbeck College and the Royal Military Academy Sandhurst.  He read Engineering at Pembroke College Cambridge and is a graduate of the Staff College, the Joint Services Defence College and the Royal College of Defence Studies.  In his regimental career he commanded 7 Regiment AAC’s Light Aid Detachment, 3 Field Workshop and 3 Battalion REME.  He served as Deputy Chief of Staff of 22 Armoured Brigade and as a member of the Directing Staff at the Royal Military College of Science.

In his later career, Major General Andrews, followed the Army’s human resources career stream.  He served in Personal Services (Army) as Colonel PS2(A), and later as Director, at a time of significant reform of the Army’s administrative and disciplinary systems.  As Director Personnel Strategy in the Ministry of Defence he led the work of developing a workforce strategy for the Armed Forces.  His final appointment was Director of Strategy and Change for the Defence Medical Services in the Headquarters of the Surgeon General.

Since 2012, and on retirement from the Regular Army, Stephen Andrews has been an executive director in the public healthcare services of the State of Qatar.  He is currently a strategy advisor to the Ministry of Public Health.

“Providing a hand up not a hand out…”