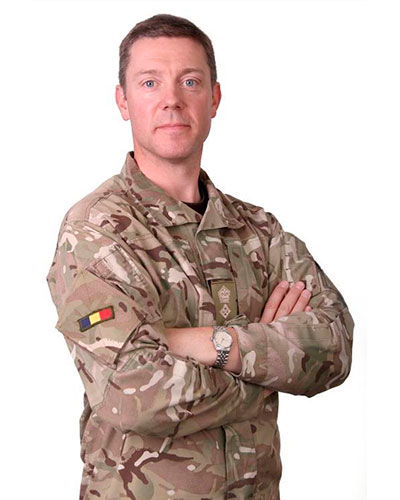 He has served in REME for nearly 29 years enjoying a variety of assignments throughout the world. He has commanded REME personnel: initially at platoon level in Arborfield; then as EME with the Coldstream Guards; OC Workshop with 9 Regiment Army Air Corps and finally as CO at 6 Battalion REME. His other REME appointments include Adjutant with 6 Battalion REME and on the staff in HQ DEME(A). His was appointed as REME Corps Colonel from April 2013 until October 2016 and is currently Commander ES for 3 (UK) Division.

He was a Trustee of the REME Central Charitable Trust, The REME Museum, and the REME Benevolent Fund and became a Trustee and Director of The REME Charity when it was established on 1 April 2016. He is one of the trustees with a portfolio lead for Finance and Investment. He is also a Trustee for Veterans Employment Transition Support (VETS) East a charity that aims to improve employment outcomes for service leavers, veterans and employers in Norfolk, Suffolk and Essex.

Colonel Scott is married to Lara, a primary school teacher in Chippenham. They have two sons and a daughter who are at university.  An enthusiastic sportsman he has represented REME at hockey and swimming.  He is keen alpine skier and amateur golfer.