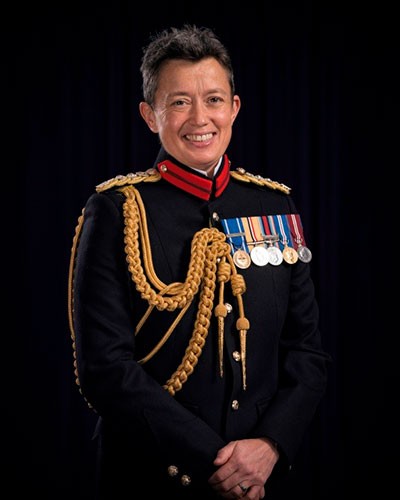 Colonel Clare Phillips graduated from Cambridge University in 1994 before commissioning into the Royal Electrical and Mechanical Engineers in 1996.  During her first assignment at 1 Battalion REME in Osnabruck, she deployed to Bosnia on Operation RESOLUTE as a Platoon Commander and then returned to REME Regimental Headquarters in Arborfield as a member of the Officer Recruiting Team.  She then became the Senior Military Course Commander (REME Corporal to Sergeant military course) at SEME, Bordon and attempted the All Arms Commando Course.

After attending Army Junior Division at Shrivenham in 2001, she assumed command of 1st Regiment Royal Horse Artillery Workshop REME in Tidworth.  She then became the Adjutant of 6 Battalion REME and deployed on Operation TELIC 3 as SO3 J1 in the Headquarters of the National Support Element.

Returning to Shrivenham in 2004, she attended the first Initial Command and Staff Course (Land) prior to becoming SO2 REME Soldier Wing at the Army Personnel Centre in 2005.  She then moved on to sub-unit command first at the Army Foundation College, Harrogate delivering Phase 1 training to 240 16-17 year old junior soldiers and then at 1 Close Support Battalion REME, Catterick where she commanded 12 Armoured Company on Operation HERRICK 12.

During her next posting as SO2 Logistic Policy and Plans within the Directorate of Logistics (Army), she was seconded as SO1 Venue Security Force Training at Joint Military Command (London) during Operation OLYMPICS.  After a short sleep to recover, she moved to an SO1 appointment in Headquarters Recruiting Group in Upavon before assuming command of 11 Training Battalion REME in Arborfield in 2014.  She left her subsequent Grade 1 appointment as SO1 REME Officer Wing in the Army Personnel Centre to become REME Corps Colonel in September 2016.  In November 2017 she returned to the Army Personnel Centre in the role as Colonel Career Management (Ops).

Colonel Phillips was appointed as a Trustee of The REME Charity in 2016, during her tenure as Corps Colonel she was the Trustee lead for Grants.  In September 2019 she will become Vice-Chairman of the Charity.

Colonel Phillips shares a field spaniel called Meryl and a white VW campervan called Snowdrop with her wife Nicky who is a police officer in Glasgow.  She is a keen sportswoman and has represented the Corps at hockey, football, rugby, cricket and swimming.  She also enjoys scuba-diving, very amateur surfing and watching rugby in addition to indulging in as much travel as possible.