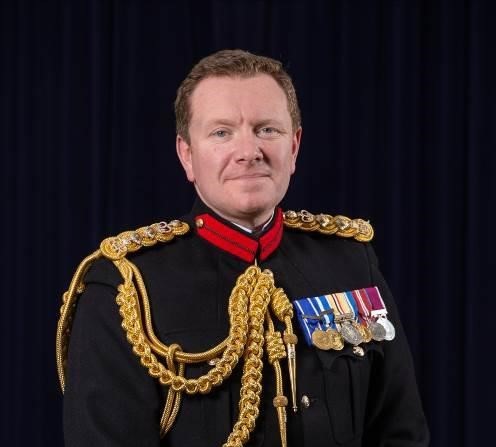 Colonel Andy Rogers commissioned into the Royal Electrical and Mechanical Engineers in 1997 and was initially posted to the Kings Royal Hussars in Bosnia during Operation LODESTAR. Throughout a 2 year posting with this tank regiment he took part in the full training year as a Troop Leader, culminating in the rapid deployment to Macedonia and Kosovo as part of the Lead Armoured Battle Group in 1999.

After a short appointment as a Platoon Commander in the REME phase 2 training school at Bordon, Colonel Rogers spent 2 years on the Corps Officer Recruiting Team before attending the Junior Command and Staff Course at Shrivenham. His next assignment, to the Royal Scots Dragoon Guards, began with the deployment to Kuwait and subsequent war in Iraq in 2003.  After this second secondment to the cavalary, Colonel Rogers became the Adjutant of 2 CS Battalion REME and was promoted to the rank of Major before attending the Intermediate Command and Staff Course (Land) at Shrivenham.

Following an initial staff apointment as SO2 Organisations and Deployments (O&D) at HQ DEME(A), where he was responsible for planning and designing the restructure of the Corps of REME, Colonel Rogers returned to Iraq to take command of 11 Armoured Company and began planning the withdrawal of forces from theatre.  After his subunit command he became the Requirements Manager for the Battlefield Utilities project team, working between DE&S and the Head of Capability, until he was selected for promotion and moved to Beaconsfield to learn French at the Defence School of Languages.  Colonel Rogers graduated from the Advanced Command and Staff Course at the École de Guerre in Paris and assumed the appointment of Military Assistant to the Supreme Allied Commander of NATO Operations (SACEUR) at SHAPE in August 2013. In July 2015 he took command of 5 Force Support Battalion REME, ending in 2018 with a 6-month deployment to Africa, working with a French and US team, alongside an African multinational joint task force combatting Boko Haram around the Lake Chad Basin region. He assumed the role of REME Corps Colonel in November 2018.

Colonel Rogers was appointed as a Trustee of The REME Charity in February 2019, four months after his appointment as REME Corps Colonel.  He is the Chairman of REME Sports and Adventurous Training, the REME Association and the REME Institution and HQ Officers’ Mess.

Colonel Rogers is the Chairman of REME Alpine Skiing and has been a ski instructor and racer for over 20 years. He has represented the Kings Royal Hussars, the Royal Scots Dragoon Guards and the REME at Alpine racing and he was presented with the Rory Cape award in 2011 for his outstanding contribution to sport and enterprise.  Colonel Rogers is ably supported by his Jack Russell called Monty (Sergeant Montgomery, in formal circles).