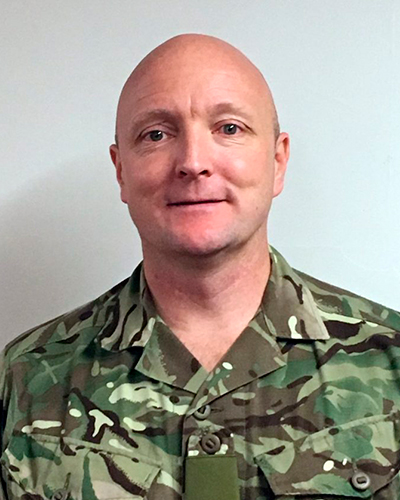 Warrant Officer Class 2 Corps, Welfare Warrant Officer Kelvin Redshaw enlisted into the Corps of Royal Electrical and Mechanical Engineers (REME) in November 1998. He completed his basic training at the Army Training Regiment Pirbright before completing his Basic Vehicle Mechanic B course at the School of Electrical and Mechanical Engineering (SEME). He was posted to 2 Bn REME in Germany in April 2000, he took part in major exercises to Poland, Canada and Cyprus, before deploying on OP AGRICOLA in 2001 to Kosovo. He was promoted to LCpl in 2002. He deployed on OP TELIC in February, 2003. October 2003 he was posted to 16 Signal Regt in Germany briefly, before attending his Class One Upgraders course in 2004. On completion of this his Class One course he was posted to JFC Brunssum, Netherlands in 2005 in this time deployed on major NATO exercises to Latvia and Cape Verde. He was promoted to Cpl in 2006. 2008 he was posted back to Germany with QRH where he deployed on OP TELIC 13 and OP HERRICK 15.

In 2010 he was promoted to Sgt and took charge of B SQN Fitter Section. In 2012 he was posted to Bulford, UK and took up the role of ESLO with 3 RMP, being the only REME person within RHQ. In 2013 he was awarded his Long Service and Good Conduct Medal. 2014 he was promoted to SSgt. Germany bound, he was posted to 4 SCOTS, Bad Fallingbostel where he took the appointment of Workshop Sergeant Major. In the Summer of 2015 he returned to the UK, Catterick Garrison on relocation with the unit. During this time he deployed on major exercises to Canada and SPTA. He completed his RQMS course in early 2018, before deploying on OP FAIROAK in the RQMS role in support of MAB10. On return in late 2018 he was posted to Aberdeen AFCC as a lead recruiter.

Throughout his career WO2 Redshaw has swam and played Water Polo at Battalion Corp Level, he enjoys running, circuit training and spinning. Enjoys building Lego and his main hobby is Motorbikes and “tinkering” with all things motor related.