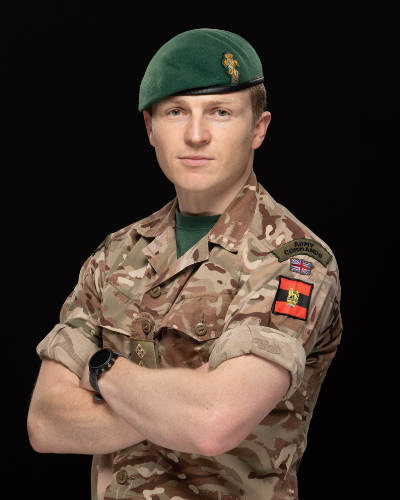 Military Assistant to the Master General REME and Corps Adjutant

Captain (Rayner) Shelmerdine-Hare joined the REME in 2015 on completion of Officer Training at the Royal Military Academy Sandhurst. After completing the 5-month Platoon Commanders’ Course he was awarded the Master General REME Prize for being the highest performing officer within the intake and assigned to 3 Armd CS Bn REME in Germany as the Electronics and General Platoon Commander.

Immediately on arrival to 3 Armd CS Bn REME he deployed to BATUS as the EMELT to 1 PWRR Battle Group (BG) on Ex PRAIRIE STORM as OPFOR. In 2016 he again deployed to BATUS as the BG Liaison Officer to 1 PWRR BG. Taking on the role of Alpine Ski Captain, he deployed to Austria and France to lead the team to success at various Army and REME competitions. In the summer of 2016, he led the Bn Shooting Team to the UK to win various competitions and was selected to compete in Army Operational Shooting Competitions.

In May 2017, he attended the All Arms Commando Course where he was awarded The Physical Training Trophy for achieving the best overall physical training results throughout the course and was subsequently assigned to Equipment Support Sqn, Commando Logistic Regiment Royal Marines as the Administration Officer. After promoting to Captain in Apr 2018, he later deployed with the Amphibious Task Group to Albania and Oman on Ex SAIF SAREEA 3 as the ES OIC of the Logistic Task Group, providing 2nd & 3rd line ES to the Lead Commando Group. On return, he briefly took command of Forward Repair Group within ES Sqn prior to attending and passing the Pre-LAD Comd’s cse in 2019. Upon gaining Engineering Officer status he was assigned to command 24 Commando Royal Engineers’ Workshop.