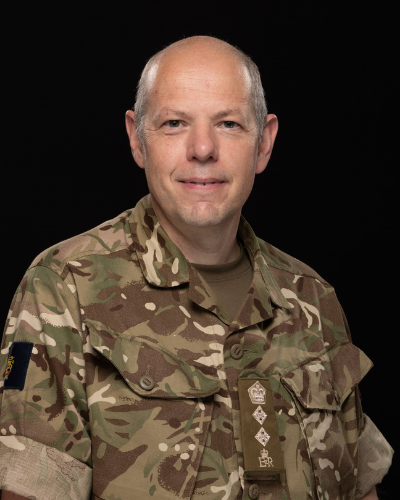 Born in Dewsbury, West Yorkshire, Jason Phillips attended Heckmondwike Grammar School before joining the Welbeck – Rowallan – Sandhurst train to a commission into the Corps of Royal Electrical and Mechanical Engineers (REME) in December 1990. Early postings thereafter included Bielefeld, Fallingbostel, Bordon and an In-Service Degree undertaken at Virginia Military Institute in the USA and Shrivenham, where he achieved 1st Class Honours in Mechanical Engineering.

Further appointments in the field force followed, including command of the Combined Arms Training Centre Battle Group Light Aid Detachment, Adjutant at 6 Battalion REME and command of the General Support Company of 1 Battalion REME. His operational service includes Kosovo with 6 Battalion REME in 2002 and most recently as the DCOS Mentor supporting the Afghan National Army Officers’ Academy in Kabul in 2016.

Interspersed with these field force appointments, Jason has been employed at staff: as the Executive Officer at the heart of Headquarters Director Electrical and Mechanical Engineering (Army); in the Army Personnel Centre, career managing REME Officers (twice) and as Secretary to the Lieutenant Colonels Appointments Board (the No4 Board); and in Army Headquarters, both Manning and Equipment Directorates as they were then known; and most recently as the ACOS Support in Regional Command supporting the Army’s Firm Base worldwide. He has also completed the Advanced Command and Staff Course in Toronto, Canada and studied for a Masters in Defence Technology at Shrivenham. Jason is a Chartered Engineer and a Fellow of the Institute of Mechanical Engineers.