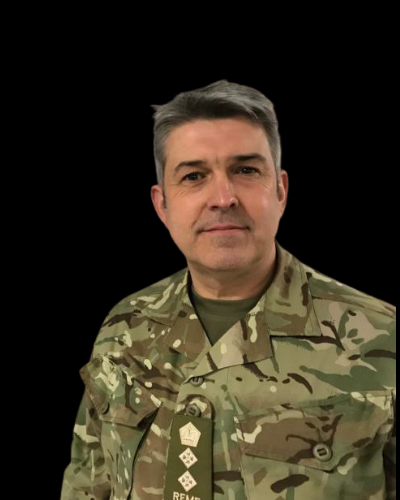 After joining the Royal Engineers as an Army Apprentice in 1986, his first posting was to 38 Engineer Regiment, deploying on various sunshine tours including Gibraltar, Cyprus and Belize, finally posted to 25 Engineer Regiment Workshops, Northern Ireland before leaving the Regular Army in 1995 as a Junior NCO. He immediately transferred across to the Army
Reserve, serving with 75 Engineer Regiment.

Whilst studying for his Mechanical Engineering Degree, he passed out of Sandhurst in 1999 and commissioned into the Royal Electrical and Mechanical Engineers, joining 127 Workshop Company, 101 REME as a Platoon Commander. After deploying on Op TELIC 2, he successfully led the Battalion Cambrian Patrol Team resulting in a Bronze medal.

In 2004, LAD Command took him to 168 Pioneer Regiment, after that, he became OC 124 Recovery Company, 102 REME. Following this, he served with Manchester & Salford UOTC as a wing OC, returning to 102 REME as a ‘National’ Reservist commanding 209 Coy, later leading the Battalion Composite Company in 2011 on Ex DARKHORSE, BATUS.

In 2012 he was again mobilised, this time to support Op OLYMPIC. Whilst serving as Second in Command, 102REME, he completed ACSC(R) prior to being selected for promotion to Lieutenant Colonel in 2013. His first appointment was as SO1 ES North (V) Force Troops Command, supporting the drawdown of LADs into the Reserve Battalions.
Coming full circle, he returned to 101 REME in 2014 as the Commanding Officer.

Post command, he was posted to HQ 1 (UK) Division as SO1 Plans (Reserve) in 2016, switching over to SO1 Reserves in 2018 on ARRG1. In 2020 he mobilised once more, this time as SO1 Plans, JMC NW on Op RESCRIPT. Col Harris took up appointment as Colonel REME Reserves in February 2021.

For his civilian career, after leaving the Regular Army, he worked for Eagle Star/Zurich Insurance for 21 years, initially as an Engineer Surveyor working for their Engineering group, latterly leaving as a Regional Manager within their Commercial Risk and Insurance Division.

Alongside his busy military and civilian career, he has an active personal life, married with three children. In terms of other interests, he still attempts to run, maintain fitness, enjoys sailing and can often be seen hacking around a golf course.